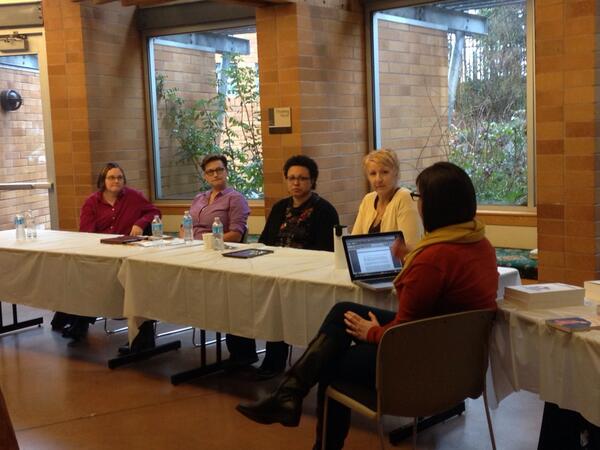 On Saturday, February 15th, Ooligan Press hosted Write to Publish 2014, a writer’s conference that aims to demystify the publishing process. This year’s conference focused on the “New Adult Revolution,” with panelists discussing how to write and market books that fit into the budding New Adult genre. The New Adult genre focuses on an audience of readers aged 18–23, with stories centered on protagonists who are transitioning from teenagers to adults. Sylvia and I (Ex Libris’ amazing intern, Melanie 😉 ) were in attendance. I was a volunteer, and Sylvia was a moderator for the Genre Fiction panel. Panelists included authors Stacey Wallace Benefiel, Allison Moon, and Jemiah Jefferson, and we were also joined by author and literary agent Holly Lorincz. Sylvia asked each of the panelists questions about what it’s like to write and sell genre fiction, and how the emergence of New Adult is influencing and interacting with the market.

If you visit Amazon’s New Adult section, labeled “New Adult & College Romance,” almost every cover features a very traditional-romance-cover-y young man and woman, half naked, in a passionate embrace. Why? As the panelists discussed, New Adult is still being defined, and right now, a lot of publishers and booksellers see the genre as sexed-up YA—in other words, as commercial, not necessarily literary. Genres like romance, true crime, and high fantasy often get a bad rap for not being “serious” literature, and it looks like New Adult’s been getting similar treatment. But hey, genre fiction is also the most consistently commercially successful fiction out there, romance especially. That said, as far as New Adult goes, the panelists agreed there is also potential for the genre to grow in numerous directions as it matures and expands.

Although some see New Adult as just a marketing ploy meant to appeal to adults who like to read YA, Holly pointed out that the audience, those 18–23 year olds, were the children who grew up reading Harry Potter, Twilight, and The Hunger Games. These readers still want to read stories like the ones they grew up on, but with older protagonists whose narratives reflect their current challenges and experiences. New Adult is, in many ways, answering an already present demand from readers—we just haven’t really had a name for that market until now.

The panel didn’t focus entirely on New Adult, however. The panelists also discussed the importance of genre conventions. For example, if you are writing romance, paranormal or not, many readers have some pretty rigidly established expectations before they even begin to crack open the cover. During the Q & A portion of the panel, I asked the authors if they felt this hindered their ability to be creative by making them feel they had a formula to follow. Allison Moon, author of the Tales of the Pack series (about which, can we just say: lesbian werewolves!), acknowledged that fear of breaking the rules—of defying genre tropes—and how doing so may turn off some readers. But she also admitted that there may be occasions and stories that call for a bit of rule breaking, and as with many things in life, it may be a good idea to demonstrate to your readers (and publisher) that you understand the formula before deviating from it.

At the end of the conference, Allison, who was also the keynote speaker, gave an inspiring speech about “sucking” in public (we swear, it was great!). It’s something writers fear—myself included—but sometimes we have to allow ourselves to fail in order to find success. As Allison put it, “The only people who risk sucking are the people who are doing things.” In her keynote, Allison offered five rules for writers:

Seems simple enough, right? So much of a writer’s daily life is spent alone (possibly at home in pajamas, with a cat nearby), but events like Write to Publish help us remember how important it is to get out there and meet other authors, editors, publishers, and people in the industry in general. When we talk with each other, we help each other generate ideas and remind each other that it’s okay to suck, as long as you’re believing in yourself, writing stuff, finishing stuff, sharing your stuff with the world, and yes, doing it all over again.

See you at next year’s Write to Publish!

Editorial services catering to the diverse creative communities of the West Coast and beyond.
View all posts by Ex Libris Editing →
This entry was posted in Uncategorized and tagged Allison Moon, conference, Ooligan Press, Write to Publish 2014, writer's conference, writing, writing advice. Bookmark the permalink.